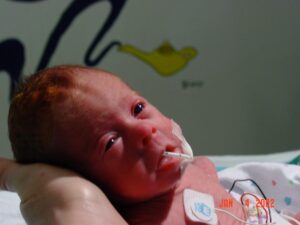 Vincent was born at 25 weeks. He was a micro-preemie and weighed just over a pound. Being born that early often causes brain bleeding, and Vincent had bleeding on both sides of his brain. As a result, he had hydrocephalus (fluid on the brain) and meningitis (an infection of the brain). He had a brain shunt put in, which then underwent 20 revisions by the time he was 2 years old. He has daily seizures and Cortical Visual Impairment because his brain has had so much trauma it cannot properly process vision. We were told Vincent wouldn’t walk, talk, or use the restroom, and that he would be on a ventilator and a feeding tube. As a parent, it was overwhelming to hear those things for your child. 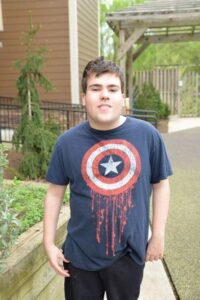 As time went on, he began hitting typical milestones – late, but he was achieving them. We had to put everything in God’s hand because we just didn’t know what would come. We have seen many specialists over the years, and they are always confused, because what he can do and what his medical records show don’t add up. For that, we continually say, “God is great.”

Vincent is a people person, and his favorite thing in the whole world is to talk to people. We felt it was important to include Vincent in all the family activities, so he went to many lacrosse games and gymnastics meets. He got used to being out and about, and realized his siblings had activities of their own. He wondered what his activity was.

He began going to Jill’s House, and it has given him his own activity to look forward to and the opportunity to have sleepovers like his siblings. Vincent was excited, because it was something unique to him, where he gets to go out and can talk with many people. Now, we have to speak about Jill’s House in code, because he gets so excited to go that we can only say, “Jill’s House,” when we are actually going.

There are a million little things Jill’s House does.

Vincent loves to talk about NASCAR drivers, their race numbers, and to ask people, “What’s your favorite number?” A staff worker printed out a list of all the NASCAR drivers’ names and numbers to be able to connect with Vincent. They embrace him. It is nice to know he is loved and cared for just as much as he is at home. 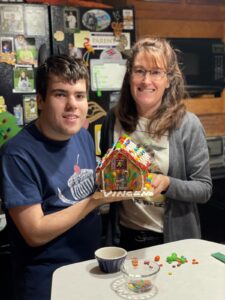 For the holidays, the Family Support team at Jill’s House delivered gingerbread houses. Each family that participated was entered into a drawing to have the Jill’s House Elves (that is, some of the staff in elf costumes) come for a visit. Gingerbread houses are hard to do, as Vincent doesn’t have a light touch, but the possibility of having elves come visit him in a time where he can hardly get out at all!?

I said we would participate, hoping to win the visit. We had the best time ever! It brought so much joy to both of us, as it was something he could participate in. Vincent ended up winning and the Elves came to visit him! He jumped for joy the entire time they were there. It was wonderful and made his day. 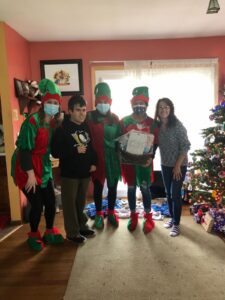 We love Jill’s House. It’s nice to know that you can send your child somewhere he is so accepted and loved. Receiving the detailed notes about his stay, who he talked to, and what he did makes it so I can ask him the right questions. They make it feel like you have been on the journey with him and a part of his stay.

Jill’s House is vital for Vincent, especially during the pandemic. Mentally and emotionally, Jill’s House has meant so much for him and for our family to have that break and knowing he is safe. Any support that Jill’s House gets is 100% appreciated by the families, siblings, and children that attend. Much of our attention is on Vincent, so it is nice to focus on his siblings during his stays, or to have a nice dinner and go to a hotel with my husband.

Jill’s House is a gift to the whole family.