Our son, Kevin, was diagnosed with high-functioning autism when he was nearly three years old. We had an idea that the diagnosis was coming because he had always been delayed. “Keep your eyes on him,” the doctor told us. Ever since then, we tried all sorts of therapy and treatments. We really have tried everything.

At first, Kevin didn’t talk. He had a lot of feelings, but had no way to articulate what they were and why he was feeling them. It was frustrating for us to try to guess what was making him upset. It was very difficult for us to guess, “Could the source of his emotional response be this? Or that?”

We needed help and were not receiving it from our county. We found ourselves at the end of a lot of long waiting lists that could take years to get off. Because we haven’t been able to get help or care from other places, our three years at Jill’s House have been especially meaningful.

Kevin liked Jill’s House from the first time he visited! He made new friends at Jill’s House, and speaks of them with a big smile and so much joy. The toys, the bounce house, the music room, and the computer room are all created specifically for kiddos like Kevin. For instance, the pool: Kevin has taken adaptive swimming
lessons, which helps his nervous system and releases his tension. That makes the pool at Jill’s House perfect for him! When Kevin found out that Jill’s House had a pool, and that it was custom-made for kids like him, he felt excitement and no fear.

Speaking of living without fear, Jill’s House has taught us that Kevin can be independent. Kevin was like a shadow, following me around everywhere—until he spent his first weekend away from us at Jill’s House, he had never been apart from me! So I was a little worried, sending him to be without me for a whole 48 hours.
I explained beforehand that Jill’s House was a REALLY fun place! When I picked him up on Sunday, he had had a wonderful time and was ready to go back for his next visit. That separation time is good for all of us—for Kevin, it is good for his confidence that he can be independent from me. Jill’s House has shown us that
Kevin can do it. When we spend time apart from him in other settings, we’ll premise the activity with,
“This will be like Jill’s House. You’ll be without Mommy for a little bit, and you can do it.” 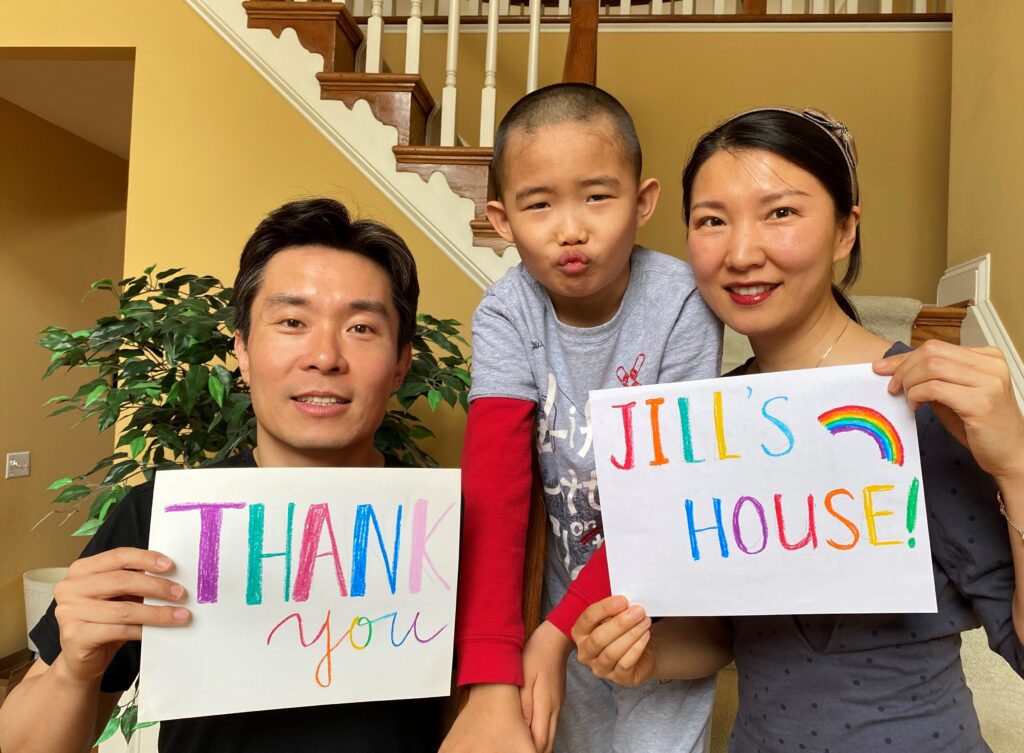 Jill’s House has been wonderful for the rest of our family, too. Helen, Kevin’s 15-year-old sister, gets more attention from me and my husband during Kevin’s weekend stays. I hope very much that when Helen turns 16 and qualifies to volunteer at Jill’s House, she’ll serve in that way! For myself and my husband, it’s so good to get the chance to talk to other parents who have children like Kevin, whether that’s at the Jill’s House Christmas party or over a meal. I want to thank all the people who have partnered with Jill’s House—it is YOU who have made this rest happen. You have made such a wonderful service possible. There is a bigger family at Jill’s House for all of these kids and it’s your support that has created that family.