“Our family is a gift, and we joke about how our house is operated on barely-controlled chaos. Caroline wants her way all the time, and our son wants his way at least some of the time. But we have learned to let a lot of things go. We have our furniture bolted to wall and we have just learned to not worry about the small stuff. But we always stress the importance and significance of family. 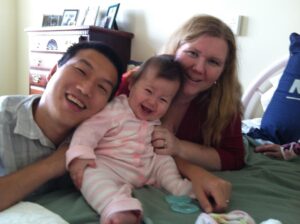 Caroline is in 2nd grade and is doing so much better after a tough year. Her teachers give her the structure she needs, but all the kids in her class put in so much work. They work harder than most adults do in a 40-hour workweek. Caroline has ABA therapy, tutoring, speech therapy, occupational therapy, and about a zillion doctors’ appointments after school. She works so hard!

When she is at Jill’s House, it’s like a nice slice of life that is outside the normal daily life and rules. Caroline loves going to Jill’s House! She has been going for a little over 1 year. If we tell her on Monday that she’s going on Friday, she will ask us every day, “Is today the day?”

“When we were naming our first child, we both came up with the name Caroline, independently. Eileen’s grandmother’s name was Caroline and so we wanted to name our first child after her.
Caroline has a rare genetic disorder. The technical name of her disorder is 2q23.1 microdeletion syndrome, which affects all areas of function, her speech, fine motor, gross motor, attention, memory, and processing. But this disorder is so rare that the prognosis is also unknown. At the point when she was diagnosed, there were only 500 cases worldwide and many of these kids have much different symptoms than Caroline. Many kids can’t walk or talk, but with Caroline, she doesn’t have a problem communicating. In fact, her teachers would say she has a gift for “self-advocating”. But we have had years and years of therapy to get her to this point!” 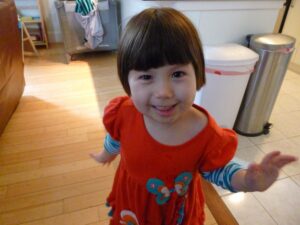 “The reality is we are in the great unknown. In a lot of ways, the genetic diagnosis is a blessing because it does make some things a little easier. We don’t have reauthorize with her school or insurance each month or year. We provide the lab report which shows her genetic diagnosis. And, we have been able to help families who have younger children who are just beginning to walk this road to a diagnosis.” 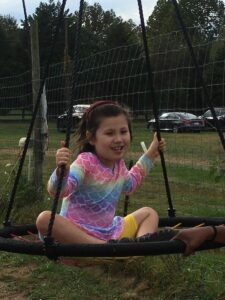 “Caroline also has a secondary diagnosis of autism spectrum disorder. Most people think that all kids with autism get over-stimulated, but Caroline is the opposite. She likes things loud!! As a baby her favorite song was the theme song to West Wing, which is loud with all the brass.
She wants everything loud, and colorful. She would tell you her favorite color is rainbow! And she wants her food spicy.
When we first started giving Caroline baby food, she wasn’t interested in eating it. We tasted her food and realized that it was bland, so we would season it with some salt and pepper. It was then that we realized that she liked her food spicy! We have a video of Caroline when she was just 2 years old drinking hot sauce directly out of the bottle! She loves hot sauce so much that we send her to Jill’s House with her own bottle of Sriracha. The food log would come back from her weekend at Jill’s House, with the exact measurements that she was given of the Sriracha, and it just makes us laugh. As a child, she would watch us put hot sauce on our food. But we also think her love of hot sauce has to do with her condition, where her sensory is most likely somewhat muted, so that bold taste of hot sauce would be more stimulating. Caroline needs a lot of input to be happy. When she’s at Jill’s House she loves the sensory and music rooms because she can be loud!” 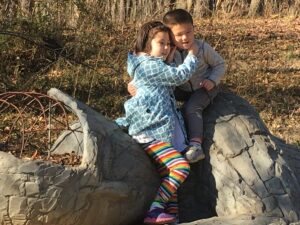 “She also loves Chapel when she is at Jill’s House, with the music and singing. She just loves it! Chapel allows Caroline to explore religion in a good and appropriate way.
James is Caroline’s younger brother has been along to therapy appointments ever since he was a baby. He is growing up with all the attention on her because she has so many needs. But when Caroline isn’t home, James is an only child. So, we take him to Olive Garden because that is his favorite restaurant. He gets all of Mommy and Daddy’s attention. When he’s all by himself he doesn’t have to feel self-conscience about what he can do. It is just another way Jill’s House is a blessing to our family.” 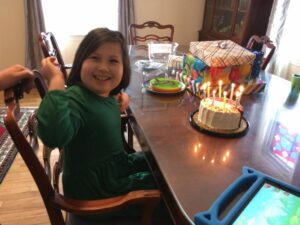 “We are just so grateful for Jill’s House. We didn’t even know it existed until she was about 7 years old, and it’s become such a special place for her, and it offers us a chance to spend time with our younger son. Caroline must work so hard, and she doesn’t even understand why! Having time at Jill’s House, to embrace her non-neuro-typical side, is healthy and good for her!”